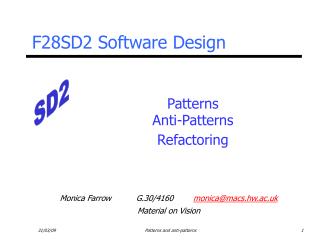 Refactoring to Patterns - . cse301 university of sunderland harry r erwin, phd. introduction. want to use a pattern in an

Patterns And Anti-Patterns Of Project Success - . haroon taqi. the challenge of software development. start with a

Some Anti-Patterns and Alternatives - . team wicked

Patterns - . by faith. patterns have been around for thousands of years. the egyptians used patterns on their mummy

Patterns - . ms. loe. http://www.gamequarium.org/cgi-bin/search/linfo.cgi?id=7547. vocabulary. pattern : a pattern is a

Patterns - . get out a piece of lined paper and set it up like this. 4 seasons in a michigan backyard. let’s discuss.