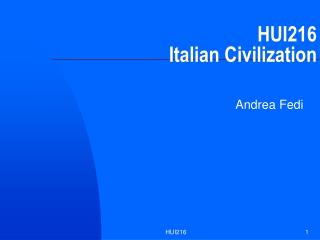 HUI216 Italian Civilization. Andrea Fedi. 18.0 Announcements. http://www.campo7.com/hui216/ The midterms will be returned after the Spring break A makeup midterm will be scheduled soon for those who have missed the exam and have contacted me. Phoenicians Spread Trade and Civilization - . about 1100 b.c., after crete’s decline, the most powerful traders along

INDIAN PHILOSOPHY - . krishna to arjuna: behold my mystic opulence! you are listening to the bhagavad-gita chanted by

The Crimean War and Italian Unification - . causes of the crimean war the ottoman empire granted catholic france rather