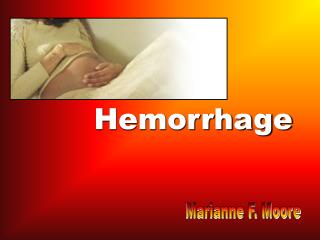 HEMORRHAGE - . it is the escape or loss of blood from the cardiovascular system causes of hemorrhage local causes of

POSTPARTUM HEMORRHAGE - . objectives. to understand the importance of prompt and appropriate management in saving lives

ANTEPARTUM HEMORRHAGE - . uchenna osanakpo. introduction. it is one of the most ominous complications of pregnancy.