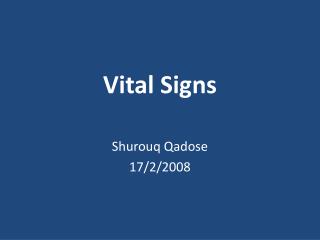 Vital Signs - . rtec 93 venipuncture for radiographers. when do you wash your hands?. when hands are visibly soiled

Vital Signs - . pulse oximetry. bellringer. think back to the last time you or a family member went to see a doctor. what

Vital signs - 2. definition: there are four objective assessment data that indicate how well body is functioning and very

Vital Signs - . guidelines for measuring vital signs. establish a baseline for future assessments. be able to

Vital Signs - . medical science 1. lesson objectives. understand what vitals are and how to document them learn how to: