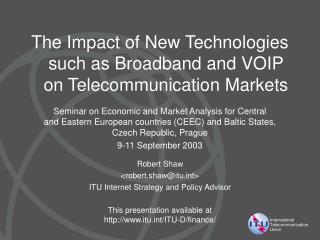 The Impact of New Technologies such as Broadband and VOIP on Telecommunication Markets Seminar on Economic and Market Analysis for Central and Eastern European countries (CEEC) and Baltic States, Czech Republic, Prague 9-11 September 2003 Robert Shaw <robert.shaw@itu.int>

ACE/RUS School and Symposium Corralling the Broadband Stampede - How has and is the (video) network traffic changing?.

BROADBAND 101 - . what you need to know in 10 minutes or less. what is broadband?. wikipedia: “of or using signals over

Directions in Next Generation Information and Telecommunication Technologies - . gregg vanderheiden december 5, 2001. the