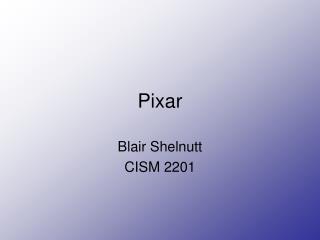 DISNEY PIXAR UP BY PADRAIC JAMES HAGGERTY - . characters from up. carl fredricksen. the old man with the assisting the

PIXAR ANIMATION STUDIOS - . about pixar. pixar is famous all around the world for its cgi

Toy Story - . todorov’s narrative theory. equilibrium (all as it should be). woody and all the toys are generally

The Walt Disney Company - . it all started with a mouse…. try to imagine a world without walt disney……. a world

PowerPoint Presentation Guidelines - . the following are guidelines and suggestions for the use of fonts, colors, and

PowerPoint Tutorial 1: Creating a Presentation - . what you will do in tutorial 1. plan and create a new presentation