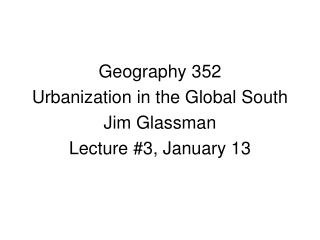 Econ Geog - . economic geography: study of flow of goods and services across space look at ways in which people provide

Welcome to 3rd Grade Jeopardy!! - . jeopardy – round 1. click here for round two. which american indian (first

European Integration and the EU - Geog 3762 geography of europe understanding the eu why the european union? what is the