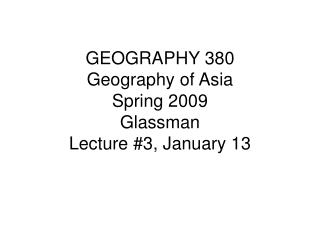 GEOGRAPHY 380 Geography of Asia Spring 2009 Glassman Lecture #3, January 13 Critical Theory Interpretations of the world are “motivated” Necessity of reflexivity: how do interests (including one’s own) shape interpretation and the production of knowledge? The Issue of Uneven Development

Geography of Asia - . essential question. how does the geography impact the population distribution of southern and