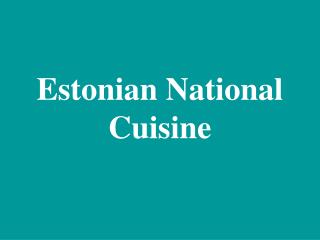 Indonesian Malaysian Cuisine - The dishes on the bali brasserie restaurant and bar menu come from two very distinct, but

Lithuanian cuisine - . traditional foods of lithuania nothing else can characterize the nation better as its cuisine . .

ESTONIAN CHRISTMAS EVE - . by tom. estonia. estonia is a small country in northern europe. it is below finland and above

Canadian Cuisine Day 1 - . objective: students will examine the canadian culture in order to state differences between

French Cuisine - . a french meal . a meal often consists of the following courses: l’ aperitif -s erved before you are