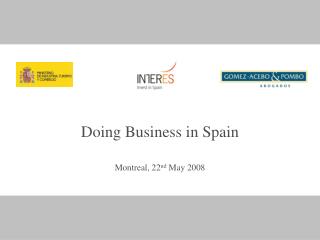 Say No To These Things For Your Wedding In Spain - Welcome to costa blanca events! we are a team of professional and

The Kingdoms of Spain and Portugal - . map of europe in the middle ages. small christian kingdoms conquered muslim lands.

Charles V of Spain - . (holy roman emperor). his life. born in ghent near modern day belgium in 1500 father was phillip,

Festivals In Spain - . questions and answers. what are the five biggest festivals in spain? describe them all and include

Education in Spain - . sarah froehlich spanish and elementary education major. purpose. this project will research the

Religion in Spain - . catholicism and the inquisition melissa alberts. history of religion in spain. prior to the

The effects of ICT investment on productivity in Spain - . prepared for the nerec conference on electronic communications