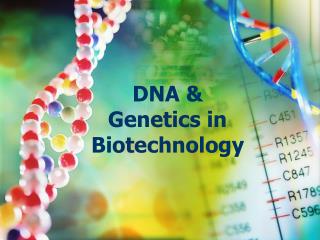 DNA & Genetics in Biotechnology. What is a DNA?.

NIH Office of Biotechnology Activities - . within the office of science policy, office of the director, nih five

Genetics - . explain the basic rules and processes associated with the transmission of genetic characteristics. describe

Human Genetics - . behavioral genetics. behavior. some behaviors can be transmitted from parent to child. what proportion