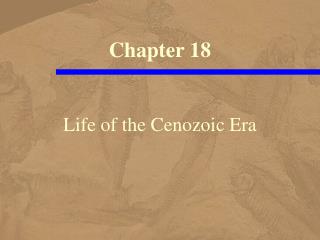 Life of the Cenozoic Era

Chapter 18 . Life of the Cenozoic Era. Among the diverse Pliocene and Pleistocene mammals of Florida were 6 m long giant ground sloths and armored mammals known as glypotodonts that weighed more than 2 metric tons. Cenozoic Biota . Recall that when Earth formed

Life of the Cenozoic Era

LIFE AFTER JURASSIC PARK: MAMMAL EVOLUTION DURING THE CENOZOIC - . paleogeography and climatic changes in the cenozoic.

Lecture 4 Cenozoic Climate Change - . we are in the midst of an interglacial time. still, we know the glaciers will come

Cenozoic - . tectonics climate. the himalayas. the closing of the tethys. as the world warms: 65 million years of hot and

The Geologic Time Table - . esrt pg 8&amp;9. most all divisions on this table are based on life-events that have

A Brief History of the Earth - . timescale. 7/8 of the entire period life has existed on earth is known as the

Cenozoic Era The age of Mammals - . 65.5 milllon years-present. cenozoic era. the cenozoic era is the time that the world

Soils and Geologic Time - . soil = f (time, …) soil formation can be a slow process not always observable on human time