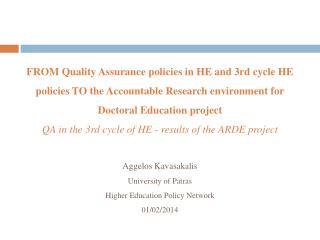 The presentation is consisted in two parts

The presentation is consisted in two parts - PowerPoint PPT Presentation FROM Quality Assurance policies in HE and 3rd cycle HE policies TO the Accountable Research environment for Doctoral Education project QA in the 3rd cycle of HE - results of the ARDE project Aggelos Kavasakalis University of Patras Higher Education Policy Network 01 /02/2014.

The presentation is consisted in two parts

Biology Review Answers Semester 1 - . smithers thinks that a special juice will increase the productivity of workers. he

Expert &amp; Knowledge-Based Systems - . one of ai’s greatest areas of success was the development of large-scale

By: Kellie Tuttle - . art. ancient india people made a lot of items from clay including pots, plates (pictured)

Gregorian Chant - . by grace karas . history of gregorian chant. unaccompanied singing has been part of the christian

CHAPTER 5 - BALLET - . i. introduction a. ballet history dates back to the 15th century in italy, a popular dance form