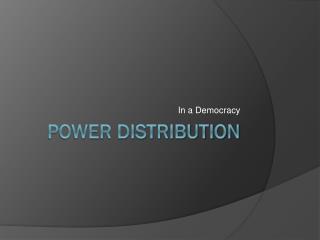 In a Democracy. Power Distribution . Majoritarian politics . leaders are forced to follow the preferences of citizens very closely. The people have such intense feelings about a political issue that leaders feel obligated to follow the popular will. Distribution of Power - . ss7cg4 the student will compare and contrast various forms of government. a. describe the ways