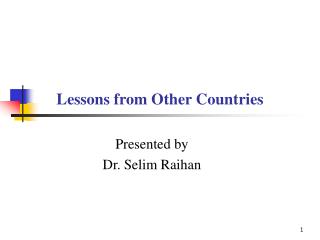 Lessons from Other Countries Lessons from Other Countries. Presented by Dr. Selim Raihan. In this session we will discuss…. Competition policy in different countries. Some case studies: What are the evidences of competition policy helping consumers in other countries?

Lessons from Other Countries

Development - . why does development vary among countries? where are more and less developed countries located? why does

Personal Safety Unit - Level 8 - . the plan. today you will be learning about personal safety when online. this unit

Spanish culture - By: stephanie campos edci 270. spanish culture. click for next slide. astonishing fact:. out of all the