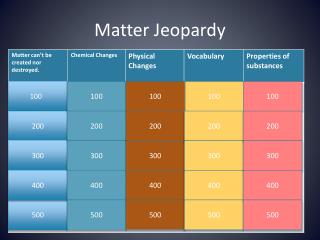 Jeopardy - This. is. jeopardy. a sure measurement. energy &amp; matter matters to you. atomic structure- it's so

Jeopardy Review 2 - . life science for 100. the following animals all eat meat; fox, tiger, wolf, and dolphin. what is a

Get a Charge Out of Matter Jeopardy - . final jeopardy. category is: water and knives. matter 100. all matter

JEOPARDY - Road to the american revolution. jeopardy. contestants. don’t forget. …always phrase your answers in the