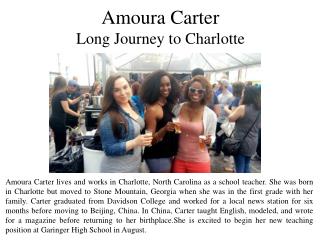 Amoura Carter took the road less traveled to eventually become a school teacher. She graduated from Davidson College and moved to Beijing, China, where she lived for a year teaching English, modeling, and writing articles for a magazine. Carter then returned to the United States after a year, having learned much about herself and about Chinese culture, to become a teacher. “Your Long Journey” - . by allison krauss and robert plant. god's given us years of happiness here now we must part

The Creation, Fall, and Long Journey - . world foundations 101. anti quiz. which are elements of, or aspects of,

Ford and Carter - . chapter 32, section 3. nixon is gone…. “long national nightmare is over” – quote from

Card Games To Play On A Long Journey - Sometimes long journey's can be bored, but avid card game player can find their

Ford and Carter - . ford. as gerald ford took over, he faced many problems in america economy starts to fall johnson’s

Carter - Cells. carter. what is in my power point. the cell the differences between animal and plant cells the organelles

Carter - . which of the following statements do you feel is most true:. president’s create their own legacy through