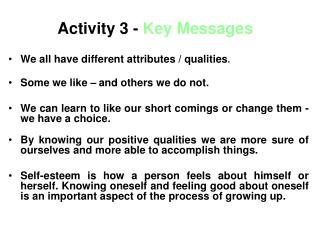 Activity 3 - Key Messages. We all have different attributes / qualities . Some we like – and others we do not. We can learn to like our short comings or change them - we have a choice. By knowing our positive qualities we are more sure of ourselves and more able to accomplish things. Session 3 Key Messages - . there are three ways to protect yourself from sexually acquired hiv and other sexually

Key Messages - . use this workshop as a learning process: what we experienced? what is new? what needs to be changed?.

KEY MESSAGES - . the ret works it has driven renewable energy in australia since it was introduced by john howard in