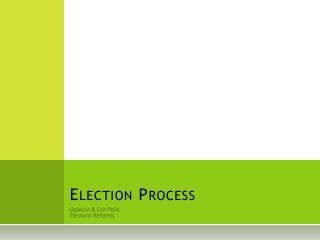 HOW ECONOMISTS VIEW THE PRESIDENTIAL ELECTION - A study conducted for scott adams, inc. by the osr group september 2008

CHAPTER 32 MISDEMEANORS AND HIGH CRIMES - . the american nation: a history of the united states, 13th edition

THE CIVIL WAR AND RECONSTRUCTION - . “a house divided against itself cannot stand.” -- abraham lincoln. election of

Leader Election - . leader election (le) problem. in a ds, it is often needed to designate a single processor (i.e., a

The COMELEC Report - . the national electoral reform summit of 2002. evaluation of the 14 may 2001 elections.