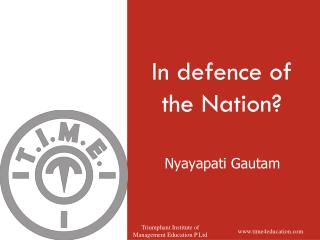 States of the nation - . andy mcnicoll communications officer, drugscope. what we’ll cover. the drugs landscape the

In defence of the EU ETS - . icao and mcgill iasl worldwide conference on aviation safety, security and the environment

The Formation of the Nation

In Defence of a Dogmatist - . brian weatherson may 2006. what is dogmatism?. we’ll be primarily concerned here with

The league of nation - After world war one woodrow wilson was responsible for the idea of collective security. .

Believe in the Strength of the Warrior Nation! - . cherokee high school 2013-14. “strength does not come from physical

In defence of stationarity - Session hw15: testing simulation and forecasting models in non-stationary conditions . in

The Second Line Of Defence - . rachel payne. if the first line of defence, the skin fails, there is a secondary line of

The Shame of the Nation - . jonathon kozol. kozol believes that schools are segregated, do you think that it’s true?.