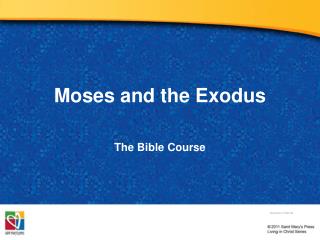 Moses and the Exodus. The Bible Course. Document #: TX001076. The Book of Exodus Begins . . . Exodus begins by listing Joseph’s descendants and those of his brothers, who came to Egypt to live with him. Together they were the sons of Israel. Exodus/ Moses - . two distinct groups …. god comes to moses…. by way of the “burning bush”, he reveals himself

MOSES: THE BURNING BUSH Exodus 3 - . pop theology. “god showed up…” it demeans the work of god in preparation it

The Moses Cycle – Exodus &amp; Passover - . prayer of the week psalm 51: miserere. 10 you will let me hear gladness

CHAPTER 5 – CONTINUED The Prophet MOSES and THE EXODUS - . the word prophet is from the greek,meaning “one who speaks

Moses and the Torah - . unit 3. at the beginning of the book of exodus:. people have been in egypt since time of joseph

Moses: Making Life’s Tough Decisions Exodus 2:1-15 - . we are all presented with many critical decisions that can

The Exodus - . prosperity knits a man to the world. he feels that he is finding his place in it, while really it is

The Exodus - Getting the big picture : session 6. the exodus. nine periods of the old testament. exodus. history exodus

The Exodus - 1 corinthians 10:11 these things happened to them as examples for us. they were written down to warn us who

The Exodus - . exodus 1-19 moses, the plagues, the passover, in the desert to mt. sinai . stele of hammurabi from babylon