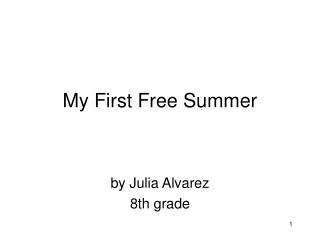 Keep Your Children Learning Over the Summer - Avoid the summer slide!. children who read over the summer do better in

Things To Do In Summer - For more details visit us : http://www.summerfunguide.ca do you love summer season??no, right

Is teaching right for you? - . click on the picture to continue. long summer are important to me. lots of vacations!. yay

Introductions - Name hometown height and…. introductions. access to the rec center during the summer ($99 value); must

Food That’s In When School Is Out - Free summer meals for kids in (name of the city or organization). food that’s in

G-strings: The summer-ready basics - With summers on us, it is already that time when you have to think a lot about what