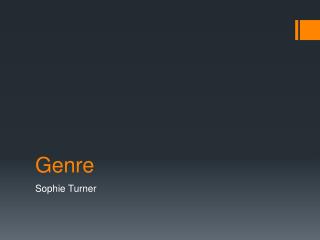 Genre. Sophie Turner. Definition. The word genre comes from the French (and originally Latin) word for 'kind' or 'class'. The term is widely used in rhetoric, literary theory, media theory, and more recently linguistics, to refer to a distinctive type of text. Christian Metz.