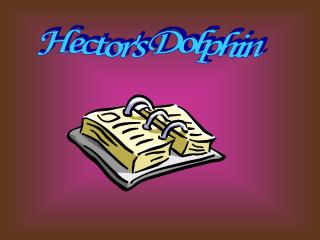 Hector's Dolphin. Picture Of My Fish. A hector’s dolphin are mammals they need air to breathe and their young suckle for milk dolphins are not porpoises . . My Labelled Fish. English Name. Hector's Dolphin - . picture of my fish. a hector’s dolphin are mammals they need air to breathe and their young suckle

Dolphin - . aedan hanrahan. where does this animal live?. dolphins live in every ocean. s ome species live in rivers.

Dolphin - . by : eyad. habitat. dolphins can be found all around the world some live near the shore others far out to

Dolphin - . presented by : deasia green. introduction. you are swimming in the clear blue ocean when something pulls you

Maui dolphin - . by : elayna. physical characteristics . smallest dolphin in the world it is small. habitat and diet.

Bottlenose dolphin - . hi, my name is bond.. bottlenose bond, and my secret mission today is to turn all of you in to.

Black Dolphin - . phylum chordata class mammalia order cetacea. anatomy. physiology. they do not have a beak like the