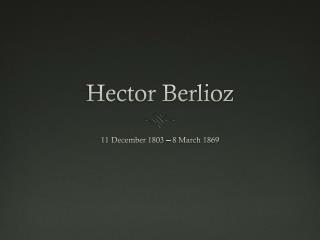 Hector Berlioz. 11 December 1803 – 8 March 1869. Early Years. Hector Berlioz was born in France at La Côte-Saint- André. He had five siblings in all, three of whom did not survive to adulthood. The other two, Nanci and Adèle , remained close to Berlioz throughout his life . Berlioz - . symphonie fantastique. overall perspective for studying this work. keep end goal in sight – this will be a

Hector - . monica chabros. would you go to war if you knew that you would die?. hero. made by apollo sunlight fight

Hector Gonzalez - . the peridot!!. what month were you born in?. august!. wh at does your mineral mean?. the peridot is