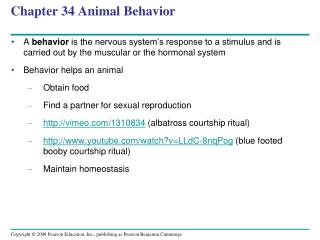 Chapter 34 Animal Behavior. A behavior is the nervous system’s response to a stimulus and is carried out by the muscular or the hormonal system Behavior helps an animal Obtain food Find a partner for sexual reproduction http://vimeo.com/1310834 (albatross courtship ritual)

Chapter 34 Animal Behavior - . what is behavior?. response to an environmental stimulus response = a single, specific

Animal Behavior - . chapter 34. /. what is a behavior?. any response to a stimulus (an external signal). examples of

ANIMAL BEHAVIOR - . behavior: what is it?. behavior: everything an animal does &amp; how it does it ethology: the

Animal Behavior - Chapter 51. animal behavior . meerkats. what is behavior &amp; why study it? . behavior everything