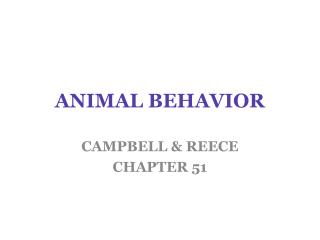 ANIMAL BEHAVIOR. CAMPBELL & REECE CHAPTER 51. ANIMAL BEHAVIOR. a behavior is an action carried out by muscles under control of the nervous system in response to a stimulus. Behavior. over time is subject to natural selection u nderstanding any behavior requires answering 4 ?s ANIMAL BEHAVIOR - . behavior: what is it?. behavior: everything an animal does &amp; how it does it ethology: the