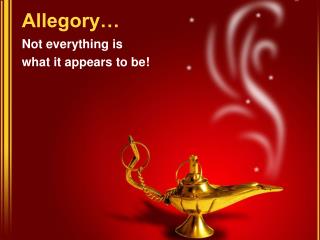 Allegory…. Not everything is what it appears to be! . Allegory defined. The basic meaning of allegory is " to say another thing “ or “ to speak otherwise ” from Latin allegoria from Greek allegorein " say otherwise " allos "other" + agoreuein "speak in public”. Allegory defined. One Flew Over The Cuckoo’s Nest Ken Kesey - . the novel. a counter-culture protest novel, which is an allegorical

Literary Terms - . allegory: a story which has meaning on both the literal and figurative or moral level. e.g. “young

Figurative Language &amp; Elements of Poetry - . allegory. a story, poem, or picture which can be interpreted to

University Bound English: For Kids Who Care - . literary terms and devices selected from a handbook to literature, 8 th

Symbolism - . allegory. allusion. the nature of evil. the role of society. dystopia. in lord of the flies. by william

Siddhartha Background Information on the Novel, Buddhism, Hinduism, Herman Hesse, Psychological Allegory and other for

Antagonist: A major character who opposes the protagonist in a story or play. - Allegory: a story in which the characters

Antagonist: A major character who opposes the protagonist in a story or play. - Allegory: a story in which the characters

Allegory and Symbolism - . what is symbolism?. symbolism is when the author uses an object or reference to add deeper

Lord of the Flies as a Psychological Allegory - . what is an allegory?. a story that serves as an extended metaphor or