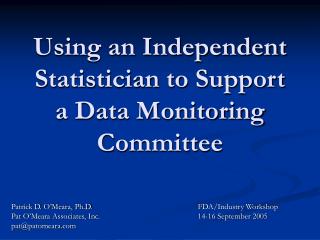 Using an Independent Statistician to Support a Data Monitoring Committee

Using an Independent Statistician to Support a Data Monitoring Committee

Clinical Study Report - . sita iyer. what is report. it is a document that summarizes all the incidences and facts that

Chapter 7 Protocols and Manual of Procedures - . protocol vs manual of operations analogy. protocol is general

Interim Analyses of Clinical Trials - . a requirement. outline. background and how dsmbs arose and function group

So You Want to be a Statistician? - . alex trindade associate professor of statistics department of mathematics &amp;