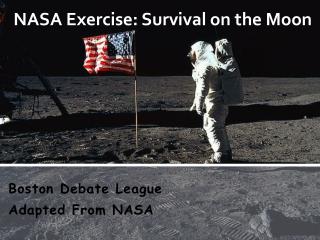 NASA Exercise: Survival on the Moon NASA Exercise: Survival on the Moon. Boston Debate League Adapted From NASA. 15 – Box of Matches. There’s not enough oxygen on the moon to light a match, in fact the moon has no atmosphere. The moon and most of space is a near “vacuum”- an area that is empty of any matter (stuff).

NASA Exercise: Survival on the Moon

On the Moon Training - . nasa and design squad: team up to inspire a new generation of engineers. agenda. the nasa/

Earth and Moon Statistics - . by the lunar and planetary institute for use in teacher workshops.

The Moon - . ond’rea. what is the moon made of?. the moon is made of rocks. how does it move?. it rotates around the

Earth’s moon - . by candace compton. the essential question. what are the 8 phases of our moon?. earth’s moon. unit

Survival Analysis-1 - . in survival analysis the outcome of interest is time to an event the event does not necessarily

The Moon - . jarome. what is the moon made of?. rock. how does it move?. the moon is big and it moves around the earth.

Phases of the Moon - . types of moon phases. new moon -occurs when the moon is positioned between the earth and sun. the

Why Would Someone Want to Put an Asteroid in Orbit Around the Moon? - . joseph a. nuth iii solar system exploration

Mission to the Moon: Role of Alabama - . http://search.nasa.gov/search/search.jsp?nasainclude=man+on+moon#.