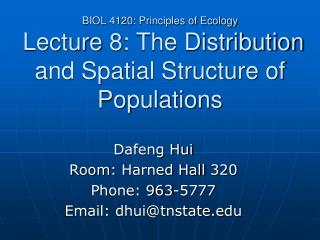 Principles of Ecology - . chapter 13. review. what is a system? smaller parts working together, organized into a larger

Stochasticity in Community Ecology BIOL 548B 102 - . why are we here? stochasticity (randomness, chance) is a concept

The Desert Biome - . by: max garfinkle. climate. low l atitude climate that has an average temperature of 64 degrees

The Tundra (and Taiga) Biome - Tundra: a treeless area between the icecap and the tree line of arctic regions, having a

Biome Poetry - . each line of the poem must begin with the letters in the biome name. include location, temperature,