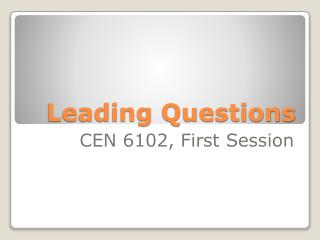 Leading Questions. CEN 6102, First Session. 1. What is LANGUAGE? 2. How is it originated? 3. What is LINGUISTICS? 4. Who are LINGUISTS?. 1. What are the suprasegmental aspects of Sounds? 2. What are important features of acoustic phonetics?. Session II: Sounds of Language.

Writing Good Questions - . a questionnaire is only as good as the questions it asks. plan what to measure. what

Mock Trial Objections - . the basics of every objection allowed in the mock trial universe. questions calling for a

Some Questions About Water, Health, and Justice - . following are some leading questions for discussion accompanied by

Logical Fallacies - . 8 th grade ela. what is a logical fallacy?. definition: a mistake in reasoning. used when trying to

Logical Fallacies - . 8 th grade ela. what is a logical fallacy?. definition: a mistake in reasoning. used when trying to

Essential Questions - . how do i write them?. what are the most important concepts my students should learn from this

Leading with Questions Steve Barkley 2013 - . how are these used in your role?. presenting training facilitating.

TRIAL INTRODUCTION - . participants. judge. a judge is a person who presides over a court of law, either alone or as part