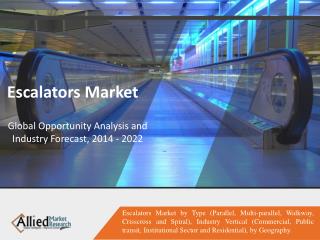 View full summary at: https://www.alliedmarketresearch.com/escalators-market
Global Escalators Market Report, published by Allied Market Research, forecasts that the escalators market size to reach $5,146 million by 2022, growing at a CAGR of 5.3% from 2016 to 2022. Escalators - . facts. the “revolving stairs” was invented in 1859 by nathan ames but a prototype was never

Culturing Microbes - . learning intention. to describe the main factors that are required to culture microbes. factors

Chapter 1 - . vs. red ocean h ighly competitive markets, where market space is crowded c hances for profit and growth are

Opportunities for Professional Growth - . by fe angela m. verzosa. growing into that image. projecting an image. what