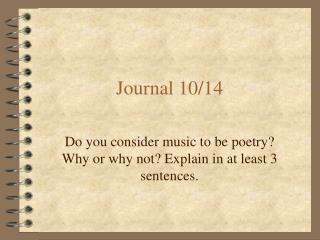 Journal 10/14. Do you consider music to be poetry? Why or why not? Explain in at least 3 sentences. POETRY. POETRY. A type of literature that expresses ideas, feelings, or tells a story in a specific form (usually using lines and stanzas). POET The poet is the author of the poem. SPEAKER

Dear Journal, - . i have just figured out i was just a fall guy, a random 14 year old kid thrown into the future. we are

WEEKEND JOURNAL #5 - Left column (must be completely filled) : what did you do this weekend? right column (make comments

Dialectical Journal - . kite runner. what does dialectical mean?. dialectical : the art or practice of arriving at the

Dialectical Journal - . what is the purpose?. a dialectical journal is another name for a double-entry journal or a

Journal 2.21.14 - . name the three branches of government. then, analyze why they all have different roles in the

Journal # 37 - . activists – people who try to make a change in society abolition – a complete end to slavery in the

Much Ado about Nothing Quote Journal - . act i. choose one of the following: “there is a kind of merry war betwixt

Journal #15 2/22/12 - . use what you learned in yesterday’s lab to predict which picture shows magnetized atoms and

Journal 9/6/13 - . start thinking about how you could make your own logic puzzle. what kind of stuff do you need to set