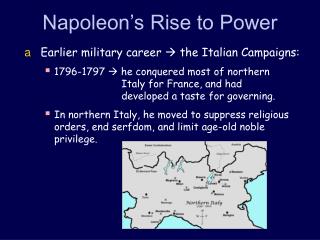 Napoleon’s Rise to Power. Earlier military career  the Italian Campaigns: 1796-1797  he conquered most of northern Italy for France, and had developed a taste for governing. Napoleon Bonaparte - . rise, fall &amp; legacy. analyze the visual below:. why this pose? what message is being

Napoleon - . seizes power. napoleon was a solider during the french revolution 1799 the government lost control of the

THE FRENCH REVOLUTION - . the age of napoleon begins napoleon’s rise to power. born on the isle of corsica in the

THE AGE OF NAPOLEON - . 1799 - 1815. rise to power takeover of power napoleonic reforms building an empire downfall of

French Revolution: The Age of napoleon - Do now: answer in notebooks: napoleon said that he owed his rise to power to

The Age of Napoleon Begins - . unit 2 lesson 4 chapter 6.4 big idea: napoleon rose to power in france and built a vast

Napoleon - . life after coronation. emperor napoleon in his study at tuileries by jacques -louis david oil on canvas ,

Research on Napoleon - . the french people accepted napoleon as their dictator two times even though they had recently