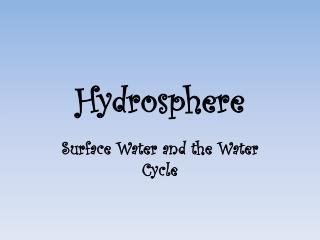 Hydrosphere. Surface Water and the Water Cycle. Goals for This Unit. Explain the structure and processes within the hydrosphere Explain how water is an energy agent (currents and heat transfer) understand the role of water in weather and atmospheric change Hydrosphere - . what will we look at in this unit?. the hydrological cycle the river course the characteristics at each

Hydrosphere - . where is the earth’s water located? what are the processes of the water cycle?. what is the

Don’t forget about monitoring the hydrosphere! - . spectral analysis: involves looking at the spectrum of

Human Impacts on the Hydrosphere - . een2.4 evaluate how humans use water. 2.4.1 evaluate human influences on freshwater

HYDROSPHERE – OS MAPWORK Using an OS map, you should be able to describe the main - Characteristics of a river and its

Remote Sensing of the Hydrosphere - . the hydrologic cycle. 70% of earth is covered by oceans and surface freshwater

Ch 9/10 Earth’s Water - . lesson 1. the hydrosphere and the water cycle. think about it…. why is it that the water in

Ch2 Water, Air and Their Impurities - . 2.a water and the hydrosphere. 水及水圈 空氣及大氣圈

HYDROSPHERE - . rivers processes, profiles and landforms. hydrosphere. the long profile of a river. 3 courses of a river.