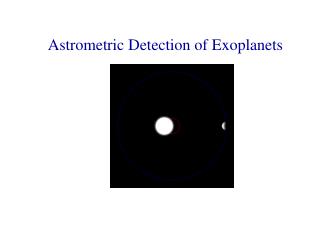 Astrometric Detection of Exoplanets. Stellar Motion. There are 4 types of stellar „motion“ that astrometry can measure:. 1. Parallax (distance): the motion of stars caused by viewing them from different parts of the Earth‘s orbit 2. Proper motion: the true motion of stars through space