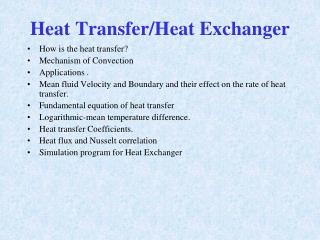 Heat Exchanger Selection - Lecture series. introduction to heat exchangersselection of the best type for a given

Heat Exchanger Design - Objective. to design a heat exchanger than meets the following criteria:cools liquid from 45 c to

HEAT EXCHANGER - . * heat exchanger used to transfer thermal energy from one medium to another for the purpose of

Heat and Heat Transfer - . where would you rather go for break, montreal or southern france?. heat capacity. why do you

Heat and Heat Transfer - . scales of measurement. celsius scale – based on where water freezes (0  c) and where

HEAT &amp; HEAT TRANSFER - . recall: heat is energy transferred from one object to another energy in transit once

Heat and heat transfer - . temperature (t). -measures how hot something is measurement of average (translational) kinetic