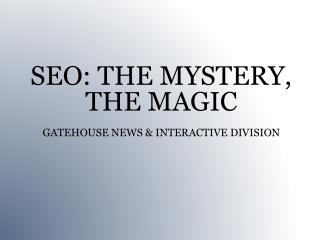 SEO: THE MYSTERY, THE MAGIC GATEHOUSE NEWS & INTERACTIVE DIVISION. Agenda. What is SEO? Why is it important? Search engines: The mystery, the magic What should the priorities be? SEO: How to Tools. What is SEO?. Search Engine Optimization Making your online content findable, relevant

Multiplication &amp; Division MYSTERY! - . for our bbes 3 rd graders. remember: if you know one fact in a fact

HOW TO FIND SOURCES ON SOCIAL MEDIA GATEHOUSE NEWS &amp; INTERACTIVE DIVISION - . agenda. why? have a presence on

The Mystery Genre - . characters. suspects are characters who may have caused the problem the mystery is trying to solve.

The Paschal Mystery - . section 5: prayer and the paschal mystery. part 1: the fundamentals of prayer. through prayer god

The Mystery - . make a heading in your laboratory journal titled the mystery make a sub-heading: clues. read the

The Paschal Mystery - . section 4: the paschal mystery and your life. part 1: living as a disciple . through the paschal

Magic and Mystery of Prague The Golem - . other &quot; golems &quot;. etienne-maurice falconet: pygmalion and

Maths, magic and mystery Chris Budd - . who likes magic?. we like magic because it’s mysterious it’s dramatic it has