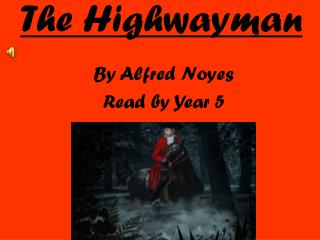 The Highwayman. By Alfred Noyes Read by Year 5.

The highway man - . by chloe h &amp; nell. the wind was a torrent of darkness among the gusty trees, the moon was a

The Highwayman - . the highwayman. read pg 246. answer these questions: what is a narrative poem? what is the setting of

The Highwayman By Alfred Noyes - . i the wind was a torrent of darkness among the gusty trees, the moon was a ghostly

“The Highwayman” - . part 1. read the poem circle poetic elements you may find in this poem (metaphor, simile,

Comparative Essay Prewriting - . what is it?. a comparative essay analyzes the similarities and differences between two

The Highwayman by Alfred Noyes - . reading tasks. first reading. listen to the poem on audio. with your elbow partner, go

The Highwayman - . http://redblogstick.files.wordpress.com/2012/10/highwayman1.jpg. a highwayman is/was: like a pirate

THE HIGHWAYMAN - . mrs. anderson 2013. the story. open up your poetrywork page in google drive write a 4 sentence summary

Spotting patterns - . write for 3 minutes about what you think the storyline is behind the words. silently read the list

Review - . for the quiz i’m about to drop on you. hearts and hands by o. henry. what was the setting? (setting: time