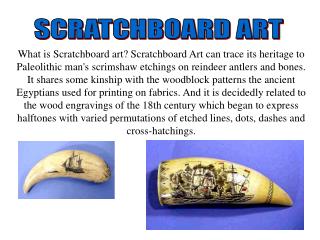 Scratchboard as a Medium - . negative as positive, drawing the natural world, …and creating texture. scratchboard began

Ocean&quot; from Swirl by Swirl: Spirals in Nature by Joyce Sidman , - Scratchboard art can be colored and is very

HISTORY OF SCRATCHBOARD - . engravings. designs and pictures that are incised (carved) in to different materials for the

An Introduction to Scratch ‘It’s All About Me’ My Interactive Collage - . today, we are working towards…. use a

Hatching &amp; Cross Hatching - . hatching is a drawing technique where you apply tone and texture in rows of

Introduction to Scratch! - . michelle venable-foster barb ericson may 2009. what is scratch?. scratch is a free

Introduction What is Scratch? - Using scratch to promote constructivist learning opportunities with fifth class in a deis

Printmaking 101 - . spring 2013 preston ms: gifted and talented art. what is this?. what do you see?. optical illusions

Scratch Art - . drawing. a mark drawn by a pointed moving tool. one dimensional and measured by length. value. the

Scratch That - . phil bagge. what is scratch?. free block based programming language from mit aimed at 8 years and up

Scratchboard - . ***have a pencil and paper ready for vocabulary notes***. what is scratchboard ?. a surface made up of

Scratchboard: - . scratchboard:. a layer of black ink covers a thin layer of chalk or aluminum the artist scratches away