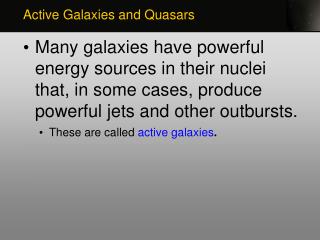 What are Active Galaxies? - . active galaxies have an energy source beyond what can be attributed to stars. the energy

Planets and the Solar System - . there are perhaps thousands of galaxies in the universe. galaxies contain. planets moons

Galaxies With Active Nuclei - 0. note that the following lectures include animations and powerpoint effects such as fly