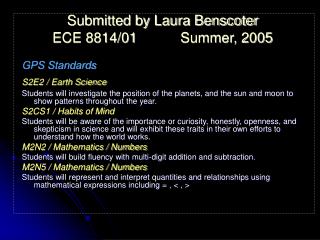 Submitted by Laura Benscoter ECE 8814/01 Summer, 2005 GPS Standards S2E2 / Earth Science Students will investigate the position of the planets, and the sun and moon to show patterns throughout the year. S2CS1 / Habits of Mind By Kristie Ewing ECE 8814/03 - . table of contents. georgia performance standards what is weather? who studies weather?

SUBMITTED TO, SUBMITTED BY : - Vns institute of technology. submitted to, submitted by : prof. ruchi saxena shilpa

Submitted to: Submitted by: - Study the effect of financial leverage structure on the profitability and liquidity of

Submitted by: - Spatial distribution patterns of healthcare coverage, influenza-pneumonia vaccinations and prevention of

SUBMITTED BY - Programmable ac power control. submitted by. abstract. based on the principle of firing angle control of

Submitted by Arkansas - . enhancement: on the diary screen, a day of the week field should be added next to the date