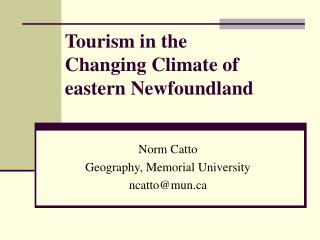 Tourism in the Changing Climate of eastern Newfoundland

Tourism in the Changing Climate of eastern Newfoundland

Module 8 Part III The Forecast - . the smoking gun. chapter 11. is the globe warming?. climate forcings: changes in some

GCSE Leisure and Tourism - . introduction to leisure and tourism unit 1. n.b. your macro security will have to be set to

TOURISM &amp; HOSPITALITY - . tourism and travel. tourism is often considered a separate field of study from

Types of Tourism - . adventure tourism. this type of tourism involves unusual holidays, which are very different from the

Tourism in New Zealand - . us$3.5 billion in foreign exchange us$5.1 billion with airfares tourism is no. 1 forex earner

Russian travel and tourism legislation. Novellae and practice The International Forum of Travel and Tourism advocates