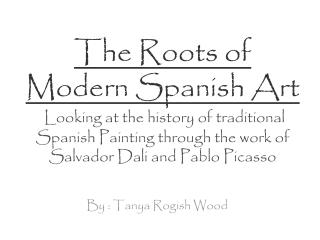 The Roots of Modern Spanish Art Looking at the history of traditional Spanish Painting through the work of Salvador Dali and Pablo Picasso. By : Tanya Rogish Wood. Looking at Art - . 5 steps for talking about artwork. #1. describe. look at the artwork and list 15 things that you see.

European and American Art: 1920-1945 - . europe. • because wwi was fought on european land, it affected european

Dada and Surrealism - Surrealism was an artists movement inspired by the dada movement. meret

The West between Wars (1919-1939) - . section 1: the futile search for stability. uneasy peace, uncertain security a weak

Salvador Dali And Surrealism in Europe - . this is a long slide show. i started researching this topic and found it

Looking at Art - An analysis of painting styles assignment #1 view the six paintings on the following slides. answer the

Spanish Level 1 - Numbers 1 - 31. spanish level 1. use language in a range of contexts and across learning develop