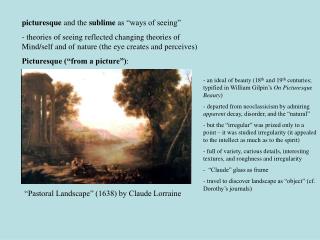 picturesque and the sublime as “ways of seeing” - theories of seeing reflected changing theories of Mind/self and of nature (the eye creates and perceives) Picturesque (“from a picture”) :.

The Sublime - . edmund burke (1729-1797). a philosophical enquiry into the origin of our ideas of the sublime and

The analysis of the Sublime - . seminar “kant: critique of the power of judgment” university of iceland session 8

The Digital Sublime - . myth, power, and cyberspace. vincent mosco. the digital sublime is a book written by vincent

Sublime Text - . plug-ins and add-ons. what it is?. open source, free text editor currently in beta for sublime text 3

Modernity: Terrifying or Sublime? - . “modernity”. the term is from 1600s era began in 1400s with printing press we

TOURING BRITAIN THE PICTURESQUE AND THE ‘DISCOVERY OF BRITAIN’ - . william gilpin observations on the river wye