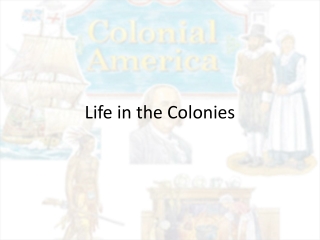 Life in the Colonies. Magna Carta. The Magna Carta was the first document to place restrictions on an English ruler’s power . Limited the monarch’s right to levy taxes without consulting the nobles. Protected the right to own private property Guaranteed the right to trail by jury.

An English Settlement at Jamestown - The early struggles of the first colony, john rolfe and john smith, and “brown

Captain John Smith Jamestown, Virginia - . created by: carolyn busalacchi. “every story has more than one side, and

Jamestown, Virginia 1607 - . key questions. how were the colonists in the new world financed. what were the reasons for

2.2 The Jamestown Colony - . totallyhistory.com. angela brown. learning targets. i can… 1. list reasons why england was

Why did Jamestown Colony succeed while other colonies failed? - . building the colony. first settlers arrived in may 24,

When was Jamestown founded? - . 1607. who founded the colony of pennsylvania?. william penn. list the 3 sections of the