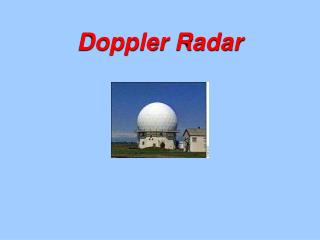 Doppler Radar. Who Invented Doppler Radar?. It was invented by Christian Johann Doppler, a physicist from Austria, in 1842. He studied at Vienna, where he became a professor of physics. Doppler worked out his ideas using sound waves. Doppler Radar Stations. How Does Doppler Radar Work?.

A Doppler Radar Emulator and its Application to the Detection of Tornadic Signatures - . ryan m. may. acknowledgements. Doppler Radar - . 17.4. doppler radar. the computer that's a part of a doppler radar uses the frequency changes it show

The Doppler Shift - . brought to you by mccourty-rideout enterprises- tuned into your frequency. image is courtesy of