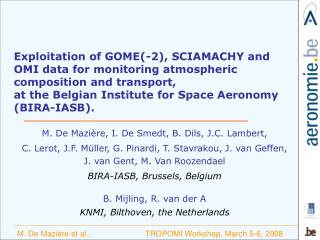 Atmospheric research at the Belgian institute for Space Aeronomy – 20 years after ATLAS-1 - . focus on space – based

CLIMATE AND METEOROLOGY I: ATMOSPHERIC TRANSPORT - . topics for today. how are changing transport patterns important for