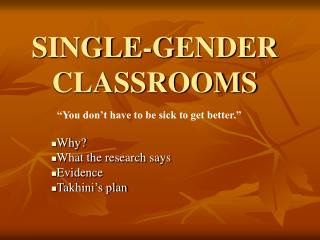 SINGLE-GENDER CLASSROOMS. “You don’t have to be sick to get better.”. Why? What the research says Evidence Takhini’s plan. Purpose of Education:. The primary purpose of education in the Yukon is to “encourage the development of students’ basic skills.” (Ed. Act, 2002) Literacy Numeracy Single Gender Classrooms - . a pilot study at clarenceville middle school for the 2006-2007 school year. the inception.

Pros and Cons of Gender Based vs. Traditional Classrooms - . trevor lewis ci 551 spring 2012. stem questions. what

Single Sex Classrooms Should Be Standard in Elementary Schools - . emily houlditch. “in a class of their own”. based